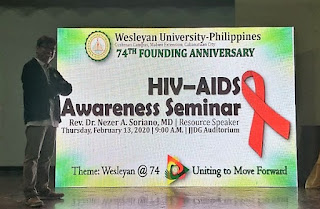 I was invited by Judge Benjamin Turgano, the President of the Wesleyan University - Philippines, to give an academic lecture on HIV and AIDS as part of their 74th Anniversary Celebration.

Judge Turgano is a Pastor's Kid. I was introduced to him by my father and had that connection with him as a fellow PK. Since then, I have several opportunities to work with him in the different ministries of the church. One very important event was when he was the Central Conference lay leader and they were organizing a Quadrennial Plan for the Philippine Central conference back in 2012. I asked Judge Turgano if I can be part of that very important event in the life of the church even as an observer. He made sure I was invited as part of the health sector.

During that important planning event, we were able to outline the key health ministries that needs to be the focus of the church. We identified an interagency task force to implement a Central Conference wide health program. They asked me to spearhead that interagency group. As a young and idealistic health minister, I shared with Judge Turgano my thoughts about what the church can do to have effective and efficient in health ministries. I was inspired and challenged by his words that keeps me going even to this day. I can still hear him say to me, "what's keeping you from pursuing your proposed health ministries of the church?" I told him my worries and he said, "you got the support that you need." Indeed, since then, health ministries are always on agenda in the Central Conference matters. Judge Turgano was very supportive of the plan and he adopted and pushed for the scaling-up of the "Local Church as a Health Ministry Oupost" program.

The HIV program was one of the advocacy programs we recognized to be an important local church ministry that should be adopted by churches at that time. Immediately, Judge Turgano coordinated with different church agencies including the BCED and the BOWW to scale-up a national HIV awareness program among churches.

Several years later, Judge Turgano is still one of the church's most supportive leader in promoting church health programs especially in raising HIV awareness in the community.